This post is reproduced from an answer that I wrote on Quora to the question posed to me, “Is Behavioral Economics Actually Used in Business?”

Since then, the implementation of behavioral economics/science initiatives in business has started to grow, but it’s still somewhat early. Back in 2010, I was part of a team that started one of the early behavioral finance centers with one of the investment manufacturing firms in the United States. We introduced thought leadership materials like some of the other firms, but we also took it further by equipping financial advisors with specific tools to help assess the behavioral architecture of retirement plans offered by companies.

One key observation I’ve had is that certain companies can have different strategies for implementing behavioral economics. This can include wanting to do holistic innovation that touches on service, products, and applications. Or they can pursue narrower approaches, like research and thought leadership. I wrote a book, Inside Nudging: Implementing Behavioral Science Initiatives in 2016, mostly to help bridge the gap between science and the application in business. That work is based on my background in closely collaborating with academics in behavioral economics and companies looking to be on the cutting edge.

Here are a few examples of how the field of behavioral economics has touched business in my corner of the world relative to behavioral finance:

As an additional reference, you might also be interested in checking out the book by one of my colleagues, The Smarter Screen. That book specifically addresses behavioral economics in a digital world.

Here are some thoughts on how consultants prepare for and handle these types of situations:

All said, consultants try hard not to let situation #4 come up by actively working on items #1-#3 to reduce risk. It is important to remember that in consulting, the process is an essential part of the deliverable.

The post above was reproduced from a question that I originally answered on Quora.

Assuming that one has capable resources to get the job done, the most important thing needed for a competitive analysis is an articulation of the true problem statement. The need to perform a competitive analysis is not a problem statement in of itself. Is the problem statement a broad one to simply formulate strategy? Unlikely. Not focused enough. Perhaps it is about assessing the atrractiveness of services A, B, and C in a particular market? Or perhaps it is about a financial assessment of competitiveness from a risk management perspective? Or maybe the purpose is to determine the robustness of an organizational model relative to competitors? All of these? Some of these? Other?

Steve Shu specializes in incubating new initiatives with a primary focus on strategy, technology, and behavioral science. He is author of Inside Nudging: Implementing Behavioral Science Initiatives and The Consulting Apprenticeship: 40 Jump-Start Ideas for You and Your Business. 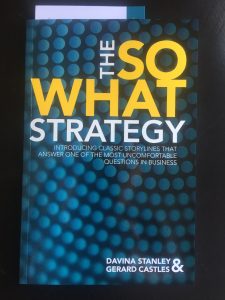 By way of background, I have long history in the consulting space and believe that effective communications separates leaders from the pack. And it’s something that one can continually work on to improve. Over the years I’ve read a number of books on communications such as books on writing, storyboards, logic, presentation construction, visual design, and verbal delivery. I’ve recently read “The So What Strategy,” a book on business communications, and wanted to share my thoughts on the book.

So what do I think about “The So What Strategy” by Davina Stanley and Gerard Castles (formerly communications specialists at McKinsey & Company)? “The So What Strategy” is an excellent book and provides readers with essential tools for more effective business communications related to writing, storyboards, logic, and presentation construction. Here are three reasons why it will be one of the top books for me to recommend to other consultants and business professionals:

I highly recommend “The So What Strategy”. Davina Stanley and Gerard Castles have done a remarkable job putting this book together. You can get a sample chapter on their website at http://www.sowhatstrategy.com. You can also take advantage of their online courses here. 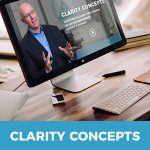 I was recently asked on Quora, “Should one use heuristics at all as they are prone to cognitive biases?” What follows are my thoughts.

Heuristics usually allow people to make quicker decisions. For example, when catching a fly baseball, sometimes people use a gaze heuristic to keep the ball at roughly the same inbound angle by adjusting their position and moving forward or backward. This gaze heuristic allows us to quickly and dynamically make judgments to catch the ball as opposed to having to pull out the slide rulers, calculators, and physics books to figure out where the ball is going to land.

While heuristics can help with speed, sometimes we have the benefit of time to slow down to think about the consequences of potential biases and where the heuristics might lead us astray. For example, people often talk about a 4% drawdown rule/heuristic for using your wealth at retirement (e.g., use up 4% of your wealth each year). But one has to remember that using up your wealth is essentially an irreversible process. What type of risk analysis have you done? Have you assessed your longevity and potential variances both positive and negative? What happens if you live 40 more years? Have you accounted for negative health events? Have you thought about maximizing your happiness in retirement as opposed to economic numbers?

So heuristics can be used with some success. But heurisrics should be audited for their benefits and shortcomings, especially if the consequences of an error are significant enough.

I don’t claim this to be a good war story, but it is a war story has had a deep impression on me.

Early on in my career, I was asked by the managing partner on the project to help a struggling manager to help develop their plan for the business. When I got into the weeds, the problem was essentially an operations strategy and planning project. I brought a little rigor to the analysis, and I worked with the manager to break down scenarios and workflows and applying Little’s Law (i.e., average inventory equals average cycle time times average throughput) to validate the strategy, offer operational improvement suggestions, and calibrate the model. When the results were presented to the executives, they were pretty impressed. I was later privately told that I had helped to save the manager’s job. Take that for what it’s worth, but in any case, that made me feel really good. A key was that I helped to facilitate the strategy and analysis process, not completely do the work on my own.

Years later and in a totally different industry, I was asked to help with an operational assessment where the company had lost a tremendous amount of institutional business in the past year due to sales and operations processing issues. The executive team wanted me to take a look at the total business and dissect where things went wrong. There was some subtext that they believed that the one of the division managers had crashed the ship. Though it was never stated explicitly, I think the executives wanted me to find the implicating evidence. I ended up using similar techniques to the first project; first I tried to determine why people churned out as customers, and then once I attributed it to cycle times, I essentially used Little’s Law to determine why cycle times went up so drastically. In the end, what I found was that cycle time increases drove severe customer churn and that cycle time increases were not due to the manager in question. It was an issue caused by and owned at a broader level. I was done. Along with process recommendations, I presented the analysis results to the executive team. They were happy, but a bit surprised that I had not found implicating evidence for the manager. Once the project was complete, I was happy. I was happy that the client was happy, and I was happy with my approach and sticking to science as opposed to being swayed by biases or internal politics of the client company. Months later, I found out that the executive team ended up firing the manager. I’ve had mixed feelings ever since, ones that have never been fully resolved.

I ask questions like, do management consultants have impacts on people’s jobs? Or do management consultants feel that they are so important that they have impacts on people’s lives? Who owns the results? Is it the management team? Who owns the implications if people’s jobs are lost? What if jobs are gained? The answers to these questions are both debateable and situational. All said, to this day certain project types and situations trigger bad vibes for me, and I try to avoid them where possible.

A common approach is to identify different options for organizational structure and then analyze tradeoffs (e.g., pros and cons or degree attractiveness by objective). That said, I wanted to share another perspective that has carried me a long way. It is the concept of first identifying strategy and second aligning structure.

Consider a very stylized example. Suppose you are trying to design a company whose strategy is to provide broadly accessible, lower-cost, optical glasses to customers within quick turnaround times of one hour. The strategy may require inventory, opticians, lab equipment, and lab personnel to be close to the point of purchase. It may also require a wider geographic structure.

On the other hand, consider designing a company that provides niche, high-end premium glasses, potentially with custom features requiring specialized equipment. In this case, inventory at the point of presence might be lower, and the company might have to send glasses requests to centralized lab, manufacturing site, and specialized personnel in order to fulfill the highly customized orders. Turnaround times might be much longer.

The concept of first setting strategy and then finding organizational structure and operational processes to match the strategy generalizes to many other situations. So remember to try to set strategy and priorities and then set structure. Find inconsistencies, ambiguities, and desirable or undesirable features. Iterate and reconcile.